Fontana's understanding of the artistic view of the sixteenth century

The painting attests to Fontana's understanding of the artistic view of the sixteenth century that drawing is fundamental to the creative process of painting and part of the mental faculty of invention (invenzione). In addition, studying ancient art was then related to the artist's technical ability to imitate (imitazione) well-known contemporary as well as ancient artists. Perhaps Fontana was here commenting that even though it was impossible at this time for a woman to attend an accademia where drawing classes were conducted using live models, she could overcome this inadequacy by relying on her talent and good artistic judgment (giudizio), as well as by studying antiquity. In addition, Fontana's cabinet of antique casts alludes to an inventory of human technical and artistic skills along with the notion that antique works can mediate between humans and nature, between natural sciences and aesthetics.

Moreover, Fontana's selection and placement of the ancient sculptures, Mercury (37) and Venus, next to each other, suggests her awareness of the astrological powers that these planetary gods were thought to have on painters and their art. Since antiquity and particularly the Renaissance, humanists and artists attempted to explain the multiple facets of the spiritual and artistic conflicts experienced by painters in the process of creation. They found their answer in the manuals of mythology and astrology, where artistic inspiration and its manifestations were said to be ruled by planetary gods. Mercury was astrologically associated with eloquence, agility, and dexterity, and he promoted creativity. He symbolized human reasoning, the mental faculty for understanding the external world and its perceptions. In contrast, Venus' planetary connections are with beauty, harmony, and joy. She illuminates the path of the stars, human feelings, and expressions of beauty. In her self-portrait, Fontana invokes the astral powers of these gods for artistic inspiration as she readies herself to draw. With Mercury and Venus as her spiritual and artistic guides, Fontana balances intellect with beauty.

The self-portrait's tondo format, further adds to the innovative quality of framed paintings. The tondo has a shape similar to a mirror. Ancient mirrors, particularly Etruscan, are renown for their fanciful ornamentation, inscriptions, and unusual mythological stories which depict the images of the most liberated women of antiquity, as well as the status mundis mulieribus or the woman of the world. In the sixteenth century, mirrors were of course used by women to embellish themselves, but painters also used them to reflect and study their own images when rendering a self portrait. The format of Fontana's painting recalls the unique self-portrait of her fellow artist Parmigianino (Fig. 18). Comparing these two works, one sees that both female and male painters were concerned with portraying different levels of reality--the natural reflection of the mirror and the painted image of the reflection--in accordance to the period's artistic theories.


In addition, the round shape of Fontana's painting also recalls that of a coin or medal, traditionally a commemorative image, like Casoni's honorific medal of Fontana (Fig. 16). (41) This allusion recalls the original purpose of her self-portrait-its inclusion in Chacon's collection of famous male and female artists. Therefore, in Fontana's painting, a dual message is revealed, one associated with the inclusion of the commission in the patron's collection of art, and the other the painter's collecting of ancient models. Thus, Fontana portrays the two aspects of collecting: acquiring and displaying art objects.

Fontana's depiction of the Venus statue, placed on her scritorio (writi
ng and drafting table), combined with the tondo/mirror format provides another level of meaning. Since antiquity, the image of Venus has been defined in terms of physical beauty. In ancient Latin, the word "venus" (phosphorous) means the luminous one. This appellation alludes to Venus as both a planet and as goddess. As such, in classical representations she is sometimes depicted holding a mirror (speculum) that reflects her beauty, alluding to her magical link to her reflection or life source. 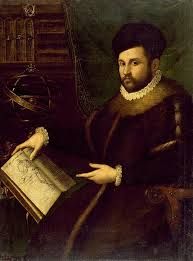